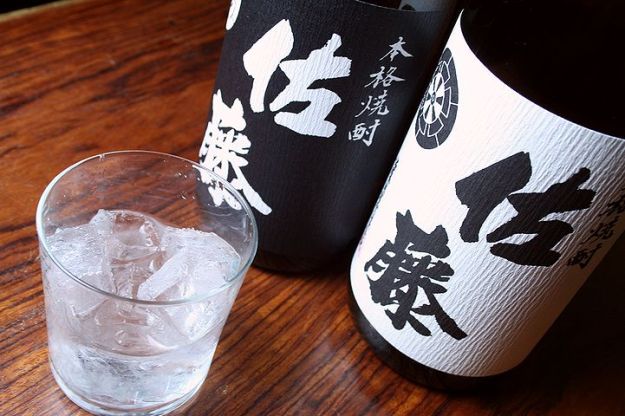 When it comes to Japanese alcohol, there is a lot of confusion about the use of the term sake. Sake in Japanese is a generic term that designates alcohol and does not refer to Japanese rice wine in particular. In Japan, rice wine is called nihonshu which means Japanese alcohol. Japan also traditionally distills alcohol from various fermented starches in ways similar to the one used to make vodka. The product of this distillation is called shochu (lit. burned alcohol) and it has, in the last few years, taken a growing place in Japan’s drinking habits.

Chamisul: the most popular soju in Korea.

Early shochu distillation techniques most likely originated in Persia where it was known as arak. Arak spread east through India, Thailand, Okinawa and finally Japan. Arak brewing and distillation techniques were also practiced in China and Korea where respectively baiju and soju alcohol can be found. In Kyushu where it was first adopted and remained a regional specialty, shochu was, until a generation ago, considered a “poor man’s drink”. Initially made form rice, shochu would eventually be distilled from cheeper starches like sweet potatoes. Shochu has tremendously improved over the years offering quality comparable to other top shelf alcohol as well as variety with different styles to choose from.

In the last decade, shochu has gone from an old fashioned rural drink to one consumed by young, hip urban Japanese. Although most Japanese will recognize Kagoshima as being the cradle of shochu, it is now produced by over 500 distilleries across Japan. Innovating production methods and specialized shochu bar now attract a large consumer base especially among professional women. Shochu has recently surpassed nihonshu consumption in Japan. Better processing technics leading to a smoother drink, increase in disposable income of young Japanese, clever branding and marketing, and influence of popular culture are among the many factors that make shochu popular today.

Add hot water and you have Shochu Oyuwari.

Shochu may be drunk straight, or on the rocks. However, traditionally it is diluted with room temperature water (mizuwari) or hot water (oyuwari). It can also be mixed with oolong tea (oolong hai) or with soda and fresh squeezed juiced (chuhai). These drinks are of course available as premixed drinks in konbini. Neighborhood bars will label shochu bottles for their patron so that they can drink it on their next visit. Unlike sake rice wine, shochu’s robust taste matches well with hardier flavor like grilled food but will never be served with sushi. Yakitori-ya (chicken skewer shops) almost always serve shochu to accompany their food. 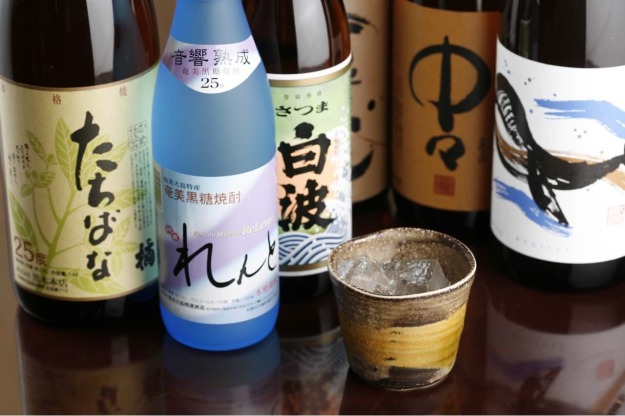 Selection of different types of shochu.

In the industry, the number of distillations and the type of yeast used in fermentation are used to distinguish between different types of shochu. However, for the novice, the type of starch used will be the key identifying feature. Sweet potato shochu (imo) is the most popular type in Japan. Its slight smoky after taste is certainly an acquired taste. Barley shochu (mugi) is mild in flavor and often aged in cask giving it a golden color and a caramelized flavor. Rice shochu (kome) is the most floral and is reminiscent of nihonshu. Sugarcane shochu (kokuto) has qualities similar to rum with very little residual sweetness. In the special category, there is Awamori which is distilled from Thai rice and is a specialty of Okinawa. Locally produced shochu are often the pride of the community, so do not hesitate to take a sip when you are offered some.

3 thoughts on “What in the world is shochu?”

Sashimi and oden 🍢 fish cake hot pot on a chilly LA night #washoku
Not sure how long these cheeses 🧀 will last at 40 C #canicule #frenchcheese
Oyster and a glass of white wine for breakfast #sundaymarket #raw #oysterlover
Tapas and rosé on the banks of the Garonne #tapas #roséallday #bordeaux
Buddae-jjigae or army base stew originated as a way to use US army surplus food in Korea #creativity #koreanfood
Persian joojeh kebab with saffron and turmeric for the last bbq of the summer? #latergram #persiancuisine #kebab
Memories of katsuo no tataki at Hirome market #tataki #kochi_jp #latergram
Katsuo no tataki seared bonito the most emblematic dish of Kochi #kochi_jp #latergram
Hirame on ice. Thanks Yochan 🙏 #kochi_jp #japanesefood #latergram
My Tweets